The Conestoga Condors Men's Extramural Hockey Team played host to several of the top teams in the province on Friday Feb 4th, and came away with their 2nd tournament win of the season. The tournament included teams from Georgian, Canadore, Sheridan, Mohawk, Fanshawe, Fleming and #1 ranked Durham. The round robin portion of the tournament featured a point system with teams collecting 3 points for a regulation win, a point for each period won, and a 1/2 point for a period tie. A bonus point was awarded for a penalty free game. 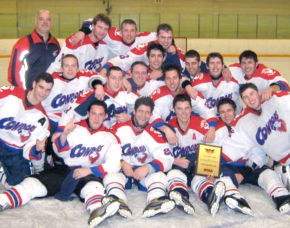 The Condors opened the tournament with a 5-1 win over the Canadore Panthers, collecting 5 ½ points. Defenseman Ian McLaren (Architecture Construction Engineering Technology) took player of the game. The 2nd game was against a strong Fanshawe Falcons team, who had stormed through their 1st game 9-0. The Condors needed at least a point to move on to the playoff round, but left nothing to chance, playing a near perfect game and coming away with a 3-1 victory and another 5 ½ points, thanks in large part to Jordan Schulz (Bus. Admin - Marketing) and game MVP Goaltender Tyler Walker (Bus. Admin - Management).

Conestoga finished round robin play as the #2 seed which meant another date with #3 Fanshawe. The Condors proved the 1st meeting was no fluke, winning in convincing fashion with a final score of 6-2, and setting up a Championship game with the #1 Fleming Auks who beat the #4 Durham Lords in the other semi-final. Forwards Adam Schell (Architecture Construction Engineering Technology) and game MVP Jordan Schulz provided outstanding efforts.

The Condors had no time to rest as the Championship game took place just 10 minutes after they had come off the ice against Fanshawe. The Condors jumped out to a 3-0 lead, and then survived 3rd period rally by Fleming to take the final 3-2. Defensemen Brendon Haefling (Electrical Engineering Technology) and player of the game Matt Lehman (Manuf. Eng. Technology - Welding and Robotics) turned in great performances. The 3rd period of the Championship game was the only period the Condors would lose throughout the 4 games.

The Extramural circuit includes teams from the OCAA Colleges as well as several Universities, including Laurier, McMaster, U of T and Trent. Conestoga is the only team in the province with 2 tournament victories. In 14 games over 4 tournaments this season, the Condors have 11 wins, 1 loss and 2 shootout loses. They have given up just 17 goals over those games, while scoring 47. The team is built on great goaltending, an outstanding defense and a group of forwards that never quit, scoring big goals and playing terrific at both ends of the ice. They expect to be ranked at or near the top of the pack when the latest rankings are released.