The simulated company run by a team of third-year Business Management students from Conestoga has been ranked #1 in the world for the past two weeks in the BSG strategy simulation. Team members Cordell Cameron, Jenna Lowry, Sara McKie and Malorie Ross have been ranked in the first, second or third tiers for each weekly competition so far. 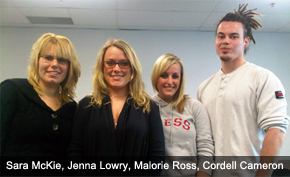 In order to achieve a first place ranking, the team had to meet or exceed the scores of 3,987 other student teams (at both undergraduate and graduate levels) from colleges and universities worldwide. This Conestoga team placed first among student teams from 268 colleges/universities participating in the simulation this week. The other post secondary institutions included: Georgia State, California State, Texas A and M University, The University of Chicago, University of Texas, North Carolina State University, Universidad de Guadalajara, Universidad ICESI, University of Ghent and many others around the world.

The Business Strategy Game is an online exercise where class members are divided into teams and assigned the task of running an athletic footwear company in head-to-head competition against companies managed by other class members from their institution and others around the world. Company operations parallel those of actual athletic footwear companies. Just as in the real-world, companies compete in a global market arena, selling branded and private-label athletic footwear in four geographic regions — Europe-Africa, North America , Asia-Pacific, and Latin America using both internet and conventional retail distribution channels.

Company co-managers must make decisions relating to plant operations, distribution and warehouse operations, work force compensation, online sales at the company’s web site, sales and marketing, and finance. The challenge is to craft and execute a competitive strategy that results in a respected brand image, keeps their company in contention for global market leadership, and produces good financial performance as measured by earnings per share, return on investment, stock price appreciation, and credit rating.

All aspects of The Business Strategy Game parallel the functioning of the real-world athletic footwear market, thus allowing students to think rationally and logically in deciding what to do and get valuable practice in making a variety of different business decisions under circumstances that mirror real-world competitive conditions. Their instructor, Dr. Maureen Nummelin, comments that "this is the best possible acid test of what we do as a business school. It enables us to compare our performance across countries and across institutions. It is a remarkable achievement for this group of students.They should be very proud of their performance".