Members of Conestoga's women's cross-country running team got into the spirit as they ran in the CIBC Run For the Cure in Guelph. Led by coach Dave Sharratt, the team decided to tie training to a good cause. They not only ran in the race, but they all dressed in pink. 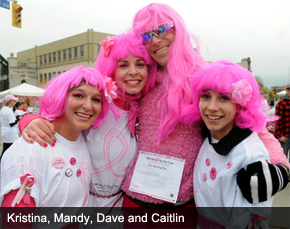 The team is just finishing its first month of XC running and the women are steadily improving. Their first race was in London - site of the OCAA championship. The woman's team placed 8th overall out of 16 teams. They were very pleased with the result, but they still think they can place better in a months time. The girls next race is in Kingston on October 16th. They are racing at a university level race. Then two weeks later, on October 30th, they will race in the OCAA Championship in London.

Feel free to come out and run with the girls anytime. Practices are on Tuesday and Thursday at 4:30pm just inside the Recreation Center.