Conestoga College has become involved in the municipal election campaign across Waterloo Region like never before - and helped break some new journalistic ground in the process. The college's School of Media and Design formed a partnership this fall with The Waterloo Region Record and Guelph Mercury to co-sponsor mayoral debates in Kitchener, Cambridge and Waterloo, with additional debates for mayor of Guelph and chair of Waterloo Region. 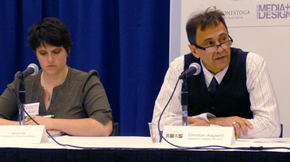 The college supplied the technology and expertise to mount webcasts on the Record’s website; the newspaper provided the logistical planning and hosting for the series of five events.

The endeavour was a first for both the newspaper and the college.

Media panelists for the hour-long debates, simulcast on college radio station CJIQ 88.3 FM, came from Conestoga’s journalism and videography programs, as well as the newsrooms of The Record and The Mercury.

"Our partnership with Conestoga brings new energy to our election debates," said Lynn Haddrall, editor-in-chief of the Record and the Mercury. "We’re thrilled to be working with the college so that we can enhance the forums with livestreaming on our website and live radio coverage on CJIQ."

Karlo Berkovich, associate editor-online content at The Waterloo Region Record, added "it’s been a treat working with Conestoga in what has been a real-world laboratory of shared knowledge. I’ve gained insight into production and staging, thanks to the professionalism of the college staff and students. What makes it especially gratifying for the partnership is the positive feedback we’ve seen from the public."

Students in the School of Media and Design’s broadcasting programs were able to access the latest technology in multi-camera web streaming, giving them an edge in the rapidly evolving world of live video produced for the web. They used a small TV-studio-in-a-box, known as the Sony Anycast Producer.

The size of a small briefcase, the Anycast will accept multiple video and audio inputs for a web stream and push out a digital signal that’s ready for display on any website. Anycast allows a live broadcast to be “switched,” meaning the director can call various shots from four cameras at an event and put them to air, just like a big studio production. The production team used the web-based streaming provider Ustream to host the live broadcast. The embed code from the Ustream broadcast was used to build a video stream window on The Waterloo Region Record and Guelph Mercury websites.

Audience participation on the Record’s website was facilitated by the use of Cover It Live viewer windows.

“These types of opportunities allow our students to apply the skills and knowledge they have acquired in their college experiences in practical, real world of work environments,” said Mark Derro, Chair of Conestoga’s School of Media and Design. This collaboration with The Record brings a value-added component to learning that traditional deliveries are unable to provide.”

The co-sponsored mayoralty debates were held in Kitchener on Sept. 28, Guelph on Sept. 29, Cambridge on Oct. 5 and Waterloo on Oct. 12. The debate for candidates running for chair of Waterloo Region was held on Oct. 4.