Ruling The World One Stomach at a Time

That is the goal of Conestoga’s Wallace Wong, a Culinary Arts student who recently took home a gold medal at the 21st Ontario Technological Skills Competition, followed by a bronze a few days later at the National Competition. 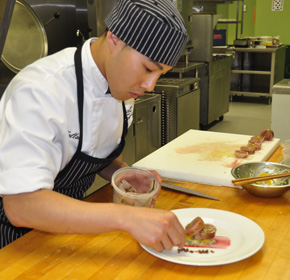 Wong got his inspiration for cooking at a young age, as he grew up in a culinary family. As a child the Food Network saw a lot of airtime in his household, and the many hours he spent taping and watching Iron Chef with his family got him hooked into the profession himself.

Wallace entered his first competition while in high school in Mississauga, where he had immediate success by winning the Provincials, and finishing fourth on the National stage. After that fourth place finish, he was determined to redeem himself and keep improving for his next chance to compete again. “I’m always learning something new at Conestoga. There is no wasted knowledge. I carry around a notebook to write stuff down and had been practicing every day since January, both at school and at home to prepare for these competitions,” he says.

Chef Instructor Paul Torrance has spent a lot of time working with Wallace this year. He’s assisted with things like menu working, tasting, timing, speed and organization and says with the right experience, he could definitely see him becoming a Head Chef in the next 4-5 years. “Wallace is a very hard worker with an incredibly strong work ethic. He’s extremely prepared and I could see him being able to handle the high stress environment of a big restaurant of even working overseas.” Chef Philippe Sararva has been with Conestoga for 10 years and his experience in judging allowed him to also give Wong some advice throughout the competitions. He sees a lot of potential in him and was impressed with his performance, considering he was going up against people with 2-3 years of experience. 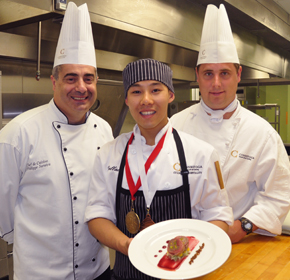 For each of the Provincials and Nationals, Wong prepared four dishes, which were the same for both, spread out over two modules. The first was a Vegetarian Module Menu, which saw him prepare a Trio of Tofu and Lentils as his appetizer, followed by an Emilia Romagna Inspired Fresh Egg Pasta Tortelloni for his main course. For the Duck Module Menu he prepared a Duck Ballotine as an appetizer and an Asian Duck Consommé for the main course. Wong said the biggest challenges were trying to balance his time and get used to where things were in a new environment. He also says it was a great experience competing at such a high level and going up against 11 of the best chefs in the country at the Nationals.

Gary Hallum, Chair of Hospitality and Culinary programs at Conestoga, was thrilled by Wong’s showing, as he feels competitions such as these help raise the levels of all students and is a good opportunity to compare yourself to other schools. “When our students can succeed and win medals it motivates everyone else and encourages other students to feel like they can do it too,” he says. With his drive and maturity, Hallum believes Wong will have endless options after graduation. A business student at Laurier University as well, Wong has his sights set on either working in a major restaurant or owning a large food chain one day, in his quest to rule the world one stomach at a time.