Rhodes - OCAA Athlete of the Week

First-year rugby flanker John Rhodes of Maxwell, Ontario is the OCAA Athlete of the Week for September 27th. Rhodes, a first-year Police Foundations student, scored a pair of tries in Conestoga's 15-14 upset victory over Seneca on Sunday. 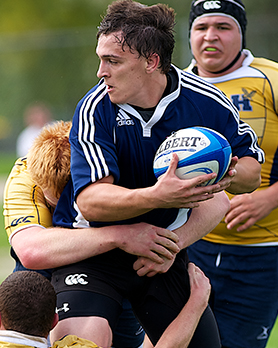 The victory over the reigning Division I bronze medalists was Conestoga's first win of the season evening their record at 1-1. The team grabbed the lead and then played great defense to preserve the victory.

Rhodes has three tries in the team's first two games and will be looking to avenge a loss to Humber in the season opener when they play at Humber on Thursday.

The win over Seneca was a huge boost for the much improved team as they try to climb the rankings in the OCAA.

John scored 2 Tries in the 15 - 14 win over seneca, and played a great assisted the team in playing a great defensive game to help hold onto the win.