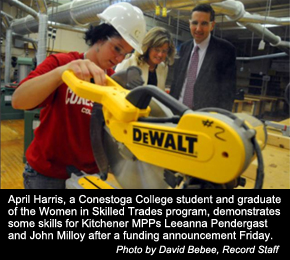 Looking around the workshop at Conestoga College's orientation for general carpentry students, it is “painfully obvious” the program is male dominated, Leeanna Pendergast said Friday.

Whether because of a lack of early exposure to skilled trades or because of societal ideas of gender norms, there are few women entering skilled trades. Only two percent of students in construction and electrical trades are women, according to Milloy.

Since 2003, the Ontario government has helped fund the Women in Skilled Trades program. This year the government will invest $1.35 million at two Conestoga sites. The information technology course offered at the Doon campus in Kitchener has received $726,162 to train 54 women in the skills necessary for an entry-level position. The program is offered in two segments, one beginning this month and the other in November, both lasting one year.

The general carpentry certificate program, offered at the Waterloo campus, received $654,312 to train 50 women over two sessions, one beginning Sept. 12 and the other in September 2011. Throughout the province, the government is investing $5 milllion to support the training of 400 women.

John Tibbits, president of Conestoga College, said there is a need to raise the profile of skilled trades as sophisticated, high-paying jobs to attract students just out of high school. The average age for students in its skilled trades program is 27.

Brenda Gilmore, program manager of trades and apprenticeships, said the college is trying to expose girls to possible careers in trades through “techspos” and work-shops on International Women’s Day as well as Saturday programming for Girl Guides and trips to elementary schools.

"These jobs are something that has to be exposed along the way. You don’t just wake up one day and decide to be an electrician” Gilmore said. “If you expose them to plumbing, carpentry, masonry, they realize they enjoy this.”

April Harris is a student with an aptitude for and a keen interest in working with her hands and building things, something she found out about herself later in life. “In the placement the learning is a lot faster because you’re actually working on a site,” Harris said. “In the classes you learn theory but when you’re working you don’t have it with you. You have to take it in and do what you’re asked.”

Having that practical experience has helped her define what type of carpentry she’d like to go into. Her favourites are framing, trim work and drywalling. “I feel way more directed now. (The program) helped me figure out what to do and where to go.”

As appeared in The Record on September 4, 2010 Written By Sarah Anderson, Record staff