There are many different paths students take to reach their ultimate career goals. This journey is unique to every person and Conestoga College’s Preparatory Programs offer Academic Upgrading designed to be a helpful way for learners to improve their education. “Adult learners face so many challenges when returning to school, especially in this economic climate. The fact that our Academic Upgrading courses are free, is certainly appreciated by all students,” says Mary Anne Sullivan, Coordinator of Preparatory Programs at the Stratford campus. Some of the services available include preparing for and receiving your high school equivalency certificate (GED) and improving or updating various skill sets to prepare for post-secondary education. 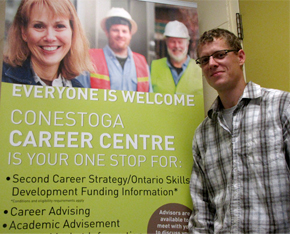 Karen Gerber is now a student in the Early Childhood Education program, however roughly two years ago she had been out of school for 24 years. After finding out that English was a requirement to get into ECE, Karen signed up for Conestoga’s Academic Upgrading program, but was somewhat concerned how she would fair, having been out of school so long and never being in a public school system.

Upon completing a brief application process, Karen began her English upgrading course and was pleased to find out that while it was a four month course, she was able to work at her own pace, even if it meant taking a bit longer to finish. “I found the upgrading course to be very helpful and my teachers were excellent. It was a stepping stone to entering a big College where there would be hundreds of students, which was something I wasn’t used to,” Karen says. She also signed up for computer skills upgrading, which she says has helped her a lot in writing paragraphs, making reports and getting her familiar with the College’s Student Portal system.

Karen has now completed her first year of ECE and has been enjoying every moment of it. Working with three and four year olds has been her favourite part so far, however she also hopes to do a placement with infants and then see where her career will go from there.

After being out of work for a while, and not working in the kind of industry he wanted to, Jeremy Lackner is someone else who’s taken advantage several of the programs offered at the college to get him closer to where he wants to be. At 31, Jeremy heard about the GED upgrading Conestoga offers, and thought to give it a try. Although he was concerned about not having the knowledge needed to be able to succeed in the program, he found his teachers to all be very knowledgeable and were always there to answer any of his questions. Once he completed his GED prep, he successfully wrote his GED exam which gave him his high school equivalency certificate, a process which took him only about 7-8 months.

What he also found helpful about the program was the ability to work at his own pace. “The flexibility was great in that I could either go to school in the day or night and then be able to work the nightshift. Being married with a six-year old son and having a daughter on the way, meant I needed some flexibility, and this program gave it to me. Everyone from the school, to my teachers, my wife and now the Second Career staff have been very supportive as well,” he says.

Upon receiving his GED, he then began the application process for the Second Career program with a Career Counsellor at the Stratford Campus. In order to be accepted into Conestoga’s Electrical Engineering program, he also needed to upgrade his math skills, so he began his math upgrading for college. It’s his hope to begin the engineering program in September, which will hopefully lead to his dream job of working in the solar or green energy industry, with solar panels or wind farms. Mary Anne says Jeremy is a great example of someone who has taken advantage of the services available to him to pursue the career he wants. “Jeremy is a highly motivated student who has stayed focused and successfully achieved his goals. We are very proud of all our students who work diligently to realize their dreams,” she says.

Conestoga offers their Preparatory Programs in many convenient locations, on a full-time or part-time basis and on a continuous intake throughout the year. For more information about these programs and how they could help you reach your goals, contact Niki Lang at 519-748-5220 x3681 or at upgrading@conestogac.on.ca or by visiting the Conestoga website at www.conestogac.on.ca