Welder caps off 5 years of competitions with Gold, Bronze Medals

At the May Skills Competition in Waterloo, Conestoga College brought home 18 provincial medals. This was six more than any other college in the province and one of the highlights was a gold medal performance by Israel Lacombe of the Manufacturing Engineering Technology – Welding & Robotics program. Lacombe followed this up with a bronze medal in a field of 13 of the top welders in the country at the Nationals. “The competitions were very stressful. You were evaluated on your welding, blueprint reading skills, and timing. Some of the toughest competitors came from Quebec where they practice a lot and always place high at Nationals,” Israel says. 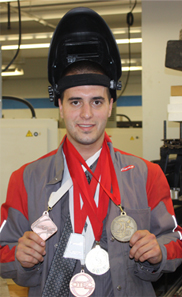 Israel is a recent graduate of the three year advanced diploma program and lists some of his teachers; Jim Galloway, Jack Ronan and Kevin Furness as people who helped him throughout his program and leading up to the competitions. Ronan, who also acted as a coach to Israel said his success is a combined result of the determination and hard work of both Israel and the faculty at Conestoga. “Israel has a great dedication to learning and his will to be the best are definitely the driving forces to his success. We were able to give him advanced training and worked on his confidence to help him relax and enjoy his skills. As a result, he was able to acquire a more technical understanding of the applied welding processes, therefore demonstrating more control,” Ronan says.

A veteran of the Skills Competitions, Israel has been competing since high school where, in 2006, he also took home gold on the provincial level in Waterloo, before finishing 5th on the national stage. He has competed every year since, highlighted by a silver medal at Nationals in 2007, and has never finished below third in Provincials.

Israel gained the motivation to get into the trade from his father, who was a welder, and also from his high school teacher Mario Blouin at Hearst High School. “My high school was always very strong in trades and we sent many students to these competitions. Once I tried it and had success in Waterloo in 2006, it gave me the motivation to keep working hard and improve,” he says. Israel was also the first at his school to join an apprenticeship program, which saw him graduate high school with two college credits.

His experience in 2006 was also his first trip to the region where he got to visit the area and find out about Conestoga. Seeing that Conestoga was the number one college in Ontario, was enough to convince him to pursue his post-secondary education here, a decision which he has not regretted. His education at Conestoga has allowed him to achieve his goals and be able to help and train people in his field at his new job that he started in May.

Lacombe now works for Fronius Canada as a Welding Application Technician. As a salesman and technician, he travels around Canada to speak with, train and give customers demonstrations as to how the company’s equipment works and can benefit them. Right now Israel is right where he wants to be, but somewhere down the road he sees himself translating that love of helping others into a teaching job and maybe one day bringing students like himself to future Skills Competitions.