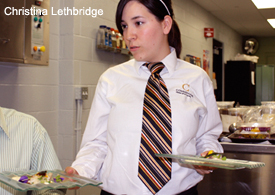 For Conestoga students enrolled in culinary and hospitality programs, an opportunity to work with some of the best in the industry presented itself on Thursday, July 15 at the Conestoga Room at Waterloo Campus. The Langdon Hall Scholarship Fundraising Dinner gave students the chance to work alongside four accomplished chefs from Langdon Hall in Cambridge, whose dining room was recently ranked 77th on the S. Pellegrino 100 World’s Best Restaurant list.

With six students working in the kitchen, seven serving and many others volunteering to help make the night a success, the group served up a six course meal to 43 guests which included members of the Langdon Hall group, program advisory members, the Mayor of Cambridge and many others. The funds raised will go towards future scholarships for Conestoga students. 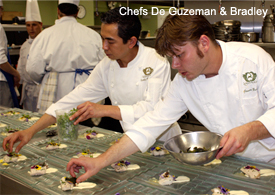 Amongst Langdon Hall’s four chefs, Grand Chef Jonathon Gushue was on hand to lend his years of experience and knowledge to the students. Chefs James Bradley, Victor De Guzeman and Birtie Tanaya who also teaches at Conestoga, also joined him. Gushue has honed his skills all over the world in places like Japan, England, Newfoundland, Vancouver, Toronto and now most recently at Langdon Hall, as their Executive Chef since 2005. Working with the students was something he really enjoyed and hopes to be able to continue to do in the future. “This was a great opportunity to expose students to something new, raise money and be able to give back to the college,” says Gushue. As far as what the new ranking has done for his restaurant, Gushue says he’s seen a big jump in business including a lot of younger customers who are now starting to find out about them.

Dining Room Manager and Sommelier at the Conestoga Room, Matthew Worden, said he received a lot of positive feedback from guests and said he was very proud of the way the students performed and hoped they took a sense of accomplishment away from the evening. Christina Lethbridge is a first year student in the Chef Training program and was responsible for serving the “Reporters” table, which was set up in the kitchen. She says she has learned a lot from her teachers so far, loved getting the chance to visit Langdon Hall for lunch and to get to learn from a chef like Jonathon Gushue and is excited about the new scholarship. “To be able to get a scholarship like this would mean a lot, because it would mean I could spend a lot more time worrying about school instead of working to pay for school,” she says. 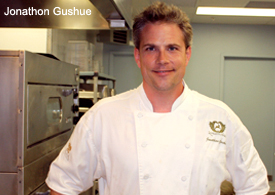 Jeremy Snow and Tracy Smith were students working in the kitchen and said the event was a “fantastic” and “awesome” opportunity and were impressed with how much food their small kitchen produced and how calm, comforting, and relaxed the night was. Nhan Vo just graduated from the Hospitality Management program and was in charge of serving the Langdon Group’s table. Vo is a silver medal winner from this year’s Provincial Skills Competition for Restaurant Service. He loved the variety of the program and enjoyed the chance to network with people in the industry for this event. Having already worked in the industry for seven years, his goals are to manage a large restaurant and to one day travel and work on a cruise ship.

In all, the event raised over $3000 for scholarships, which will be given on behalf of Langdon Hall to culinary and hospitality students. The money will likely be split amongst 2-3 scholarships and will be the first awarded by Langdon Hall, with the hopes of making the event and scholarship an annual occurrence.