Jonathon Sinke has been interested in woodworking since grade 7. In his hometown of Jordan, Ontario, his father is a builder who had a shop of his own at home when Jonathon was growing up. This gave Jonathon the chance to start practicing on his own and over the years he bought more machines to add to the shop. He has worked on several things from home, such as doing veneer work, building a whole bedroom set and working on a demilune table. 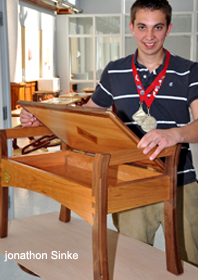 At the Skills Competitions held at RIM Park in May, Jonathon put his talents to work by taking home gold medals at both the Provincials and Nationals. In the Provincial round he was in a field of four students, where he was the only one to finish producing an oak wall cabinet. The National stage offered much stiffer competition, with the top students competing to build a hall bench in 14 hours. “There was a lot pressure at the Nationals because of the time restraints and trying to make as few mistakes as possible. You have to make a lot of split second decisions and not crack under the pressure. If you make a mistake you need to quickly decide if you should fix it, change it, or just leave it alone and move on,” he says.

Mark Bramer is a Professor at Conestoga and also the International Canadian Expert for Cabinetmaking. He was able to work with Jonathon as a Coach in the lead up to these competitions by going over important contest details, talking about past competitions and preparing him mentally for what it would take to compete. He sees the passion and motivation Jonathon has for the trade and thinks he could definitely have a chance to place high in next year’s World Championships in London, England. The Worlds will be a 10-day event with a four-day competition, and will see Jonathon eventually work with a full-time trainer next year to prepare. Bramer is thrilled Sinke has had so much success and sees the Worlds as a great lift to the rest of the school. “This is a great opportunity, not only for Jonathan, but for the whole school. When one of your own goes off to compete against the best in the world, it gives the school some pride and excitement which is well deserved,” he says.

Jonathon finished high school with top marks and could’ve had his choice of many universities, however coming to Conestoga was an easy decision once he did his research and found out it was one of the top woodworking schools in the country. “I’ve been very impressed with the teachers and facilities at Conestoga and coming here has given me many opportunities such as competing at Skills. Being able to have a plaque in my office saying I’m the best in Canada, will help me gain the trust of clients and definitely help me in the future,” says Sinke.

A high school co-op at Tremont Wood Specialties gave him more experience in helping to design custom interiors for yachts and boats. Still an apprentice at Tremont today, he also works at Old Mill Artisans where he builds cabinets, mantles, entertainment systems and custom furniture. Come next spring he hopes to have all of his apprenticeship hours and courses completed and to write the Red Seal Exam to become a Certified Cabinet Maker. From there he hopes to start up his own custom furniture business. Looking towards next October in London, Jonathon is still finding this whole experience hard to believe, but is looking forward to the competition and visiting family that he has in England and Holland.