Conestoga Names Athletes of the Year

Conestoga recently announced Jocelyn Lodder and Shane Ditchfield as their female and male athletes of the year for 2009 - 2010. 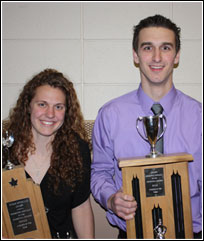 Lodder was a member of the women’s outdoor and indoor soccer teams this year and also competed on the cross country running team. She is in her final year of the Occupational Therapist Assistant/Physiotherapist Assistant program. Although she was already playing varsity outdoor soccer she decided to join the cross country running team midway through the season and fit in quite well.

The only meet she had a chance to participate in was the OCAA Championships, where she finished 16th overall out of 80 runners. In soccer, Jocelyn helped control the midfield with non-stop running and speed. She played an important role in both the offense and defense taking many of the key corner kicks to help set up her teammates for scoring opportunities. She scored 1 goal in outdoor and 2 goals at the Indoor Provincial Championship. She was an OCAA League All-star and won the Most Valuable Player award for Indoor Soccer.

Our Male Athlete of the Year is in his final year at Conestoga and will be graduating from the Law and Security Administration Program. Shane Ditchfield was the goaltender for both the indoor and outdoor soccer teams. I think it is safe to say that he was the main reason why the outdoor team made quarterfinals this year. He only allowed 4 goals during 11 regular season games and was given the OCAA West/Central Division Top Goalie award. He allowed fewer goals than any goaltender in the league. He was also named an OCAA League All-Star. During the Indoor Season, Ditchfield continued to play well, stopping all but one shot at Regional’s, allowing just 1 goal in 4 games, helping the team qualify for the Provincial finals. Again he dominated only allowing one goal against in the semi-final, before shutting out George Brown to help Conestoga win the OCAA bronze medal. For his outstanding efforts Ditchfield was awarded the outdoor soccer and indoor soccer MVP awards.