One man’s passion for southern-style barbecue, and a few of his daughters’ college projects, has resulted in a succulent success story. 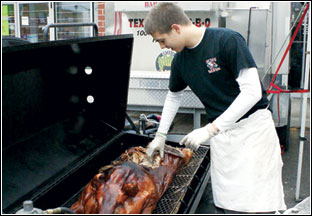 Hog Tails Bar B Que at 645 Laurelwood Dr. in Waterloo, a new restaurant/takeout spot and catering business featuring a commercial smoker, had its grand opening on Nov. 28.

At the event, the Corrigan family served up the juicy treats of a long journey that started when father, Chris “The General” Corrigan, bought his first smoker in Houston.

“When we start talking about it we realize how complicated and long it has been,” said oldest daughter, Shannon Corrigan, a Conestoga graduate. “We all think it happened so quickly, from being a dream to being a restaurant, but then we talk about it and it’s like, ‘Oh my god, this has been 25 years in the making.’”

For years, The General travelled throughout the southern United States on his Harley-Davidson motorcycle checking out the local barbecue and juke joints that now hang in the picture frames around his own restaurant.

When he returned north of the border he brought the southern flare of slowly smoked meat with him and shared it with his family, which includes his wife Cathy and three kids, as well as friends.

“It went from family and friends to people we didn’t even know contacting us for catering,” recalls Shannon.

“As soon as we got that smoker it was like, OK, now we have to do something with it,” said Caitlin Corrigan, a second-year business administration management student at Conestoga.

The recipe tinkering and family cookouts changed from hobby to business when Chris sold the family’s office supply store and went into the catering business full-time with his wife. He started entering competitions and faring well against the big boys from the barbecue hot spots in the U.S. These days, his ribs always place in the top 5 at an invite-only competition.

“He proved to himself he could do it ... he is a chef at heart without the papers,” said Shannon.

Hog Tails Bar B Que evolved within the Corrigan family from backyard family fun, to a family-run catering business. But the eatery was created from a second-year food and beverage project that had Shannon devise a plan to open Hog Tails Bar B Que as a restaurant.

Shannon still has the one-inch thick report featuring the motorcycle riding hog logo on the front cover that can now be seen on the business’s signage, menus and catering vehicles.

“I remember showing it to him and he read it with a tear in his eye, you know, because it was really hitting home for him,” said Shannon.

“It was exactly what he wanted,” added Caitlin.

And it may be exactly what Waterloo food lovers have been looking for.

“Our ribs are huge. They are two-and-a-half pounds and less than $25 for a whole meal,” said Shannon. The restaurant’s theme is “blues, bikes and barbecue,” but the backbone is tender pulled pork, chicken and brisket.

It isn’t just the size of the portions, but the slow-smoked method of cooking that has earned Hog Tails Bar B Que regular customers already.

“We smell like smoke all the time,” laughed Caitlin. “But it tastes so much better than just grilling.”

Twenty-five years later, Hog Tails Bar B Que is the result of a family sharing a passion and working together to turn a dream into a reality. With the help of a couple of projects completed here at Conestoga by the Corrigan girls, that reality is turning into a success.

“Conestoga helped me so much. Everything I’ve learned I used to help open the restaurant. I will tell anyone until my dying day, if you follow through with what you are going to school for, it will pay off,” said Shannon. “I can’t even tell you how much my program has paid off.”