Students from the Public Relations program of Conestoga College have developed their skills and expressed their community spirit by working with the Alzheimer Society of Kitchener-Waterloo in developing a new initiative to mark the society's 25th anniversary. The students' creative ideas and writing have helped the charity launch its first-ever Christmas direct mail fundraising appeal. 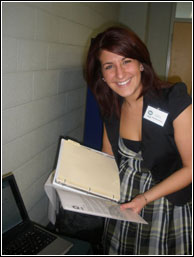 Professor Paula Barrett says, "I approached the Alzheimer Society in September with a proposal: the PR students would write a direct mail fundraising piece as a class assignment, and the charity would donate its time by visiting the classroom and guiding students on a real-world project."

Twenty-three students submitted projects, which were then short-listed to the top five and presented to the Alzheimer Society for review. The proposal selected - called Light the Way - is the work of second-year student Nicole Hamilton of London. Hamilton developed the creative concept, selected the campaign name, and produced all the writing and graphics involved. The campaign, cited for its creativity and simplicity, will begin in about a week.

The aim is to seek new avenues for the fundraising activities so important to the society and its clients.

Alzheimer Society Development Coordinator Debra McGonegal comments, "This year we're celebrating our 25th anniversary, so we wanted a positive appeal with a focus on hope. I was truly inspired by the creativity and thought that went into the students' submissions."

More information about the local Alzheimer Society can be found at www.alzheimerkw.com.

As for Nicole Hamilton, she now has a real-life project to display in her professional portfolio. Hamilton is a graduate of London's Catholic Central High School and also holds a bachelor's degree in Mass Communications from Ottawa's Carleton University. She is scheduled to complete her Conestoga studies in the spring of 2010.

"I feel so fortunate to have been given this chance to not only build my portfolio, but to create something for a charity that does so much for this community," she says.

Conestoga's Public Relations program is a two-year diploma-level program at the Doon campus in Kitchener. Its focus is on strategic and creative communications strategies to address organizational goals and issues, and to advance business opportunities with key publics. Among the areas of study in the program are media relations, print design and production, research, strategic communications planning, issues management, values and ethics, and public relations consulting.