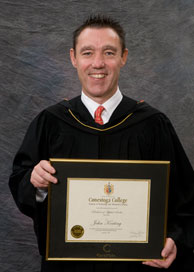 He was presented with a Bachelor of Applied Studies by Conestoga President John Tibbits at the fall ceremony of Conestoga’s 41st Convocation, held November 7 at the Doon campus in Kitchener. The ceremony recognized more than 1,200 graduates of Conestoga degree, diploma and certificate programs from all academic divisions of the College.

Mr. Keating is known locally, nationally and internationally as a forward-looking, innovative business leader. He has been with COM DEV since 1992 and been CEO of COM DEV International since 2002. Under his guidance, the company has continued its growth and prosperity, its commitment to excellence in products and services, and its belief that its employees are the key to success.

COM DEV International is a leading global designer and manufacturer of space hardware subsystems. With facilities in Canada, the United Kingdom and the United States, COM DEV manufactures advanced products and subsystems that are sold to major satellite prime contractors for use in communications, space science, remote sensing and military satellites. The firm has just been named one of the Waterloo area’s top 15 employers for 2010, in recognition of its progressive work environment, training and skills development program, performance management system, benefits and community involvement.

Under Mr. Keating’s leadership, COM DEV has been a valued partner of Conestoga, providing guidance and assistance to the institution’s growth, as well as important career opportunities for its graduates.

Mr. Keating has been an effective advocate for the practical, skills-based type of polytechnic education that Conestoga offers. He obtained his education at Leicester Polytechnic (now DeMontfort University) in England, studying mechanical and production engineering.

In addition, he served for six years as a member of Conestoga’s Board of Governors, including a term of office as Chair of the Board.