Former Conestoga dean and professor Tony Martinek, who touched the lives of many students, has been awarded the prestigious Gratias Agit 2009 Award by the Czech Republic. 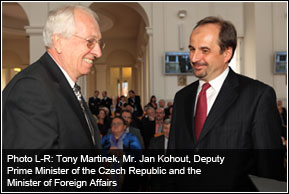 Martinek immigrated to Canada in 1967 and three years later became a Master of Applied Science at the University of Waterloo, Ontario. For many years, he served as Dean of the School of Engineering Technology at Conestoga College, Ontario. He became actively involved in the Czech community and after 1989 he was one of the co-founders of the Canadian Fund for Czech and Slovak Universities in Toronto. His support significantly contributed to the development of bilateral scientific contacts and student exchanges.

Most recently Martinek was part of the Conestoga team that played a leading role in working with two Canadian schools (the University of Waterloo and SAIT Polytechnic) and three European universities to set up a faculty collaboration and student exchange under the Transatlantic Exchange Partnership (TEP) program. The genesis of the program lies with Martinek, who wanted to give Canadian students the opportunity to broaden their educational experience by learning overseas.

The Award, which has also be given to film director Milos Forman (One flew over the cuckoo’s nest, Hair, Amadeus), footwear magnate Tomas Bata and former US Secretary of State Madeleine Albright, is one of the highest honors the Czech government can bestow.