Jason Smith, a second year student in the Architecture - Construction Engineering program, is the new OCCA running champion. Smith ran a remarkable 27:14.6 to take the gold medal at the OCAA Men’s Cross Country Running Championship in Windsor. The second year runner was continually on the move during the race overtaking the pace biker on two occasions enroute to the victory. Smith was namd the OCAA Athlete of the Week for his effort. Conestoga’s Dave Sharratt, the two-time defending OCAA champion, had an off day finishing 21st. 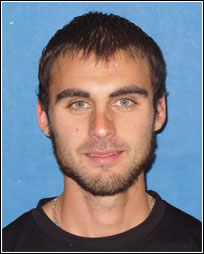 This is Jason’s second year on the cross country running team at Conestoga College. When Jason came out last year at the start of the season he was concentrating on bodybuilding and he was carrying an extra 20-25 pounds of muscle on his frame. He looked great for the team photographs but it was hard to carry that extra weight around a challenging 8km course. However, as the season progressed, Jason made incredible progress. He finished 7th at the Provincial Championships last year. He had a bad day at Nationals in Kingston last November but what impressed me the most about Jason was how he responded to that setback.

Jason came back to the team this year on a mission. He started training in May by running 8-10 miles a day 6 days a week at an easy pace on hilly trails. All of Jason’s running is done by "feel". Jason starts his runs at an easy pace with some runs finishing near race pace which for Jason is 3:10 – 3:20 per km. Jason’s schedule demonstrates what it takes to be competitive in terms of medals as you must be in shape come September 1st as the cross country season is only 2 months in length.

Most of Jason’s hard workouts are progression runs of 60-90 min. Some speed workouts and races were sprinkled sporadically throughout the summer. He ran a 500m, 5km, 10km, and triathlon this summer with a focus on steady improvement from week to week.

Jason has not taken a day off running in the last 10 weeks because he feels that rest days are not needed if he is injury free and training properly. Jason is currently running 70-80 miles per week. He doesn’t even wear a watch in training because he prefers to run at a rate that his body “feels” like doing that day. His major training concern is raising his lactic acid threshold and that is done with long steady running.

Jason is a low key guy who leads his teammates by example. He finished second at his two previous races earlier in the year at Fanshawe and St. Clair College and he has been mentally and physically prepared for each race this year. He is a very mature individual and is engaged to be married in 2010 to Lucrecia Castillo-Courtade who graduated from Conestoga last year. Lucrecia is very supportive of Jason’s running and it takes a supportive partner when one looks at the time commitment that Jason has put into his running over last six months. It looks like Jason is peaking at exactly the right time for the National Championships in Camrose Alberta, on Saturday, November 14th.

Other Conestoga runners who will be accompanying Jason to the National Championships are Heidi Bechtold who finished 10th at Provincials and Dave Sharratt, Francis Coral-Mellon, Alex Hunak and Erik Vicujnik who finished 21, 24,27 and 35 respectively in the men’s competition. Other top female runners were Jocelyn Lodder and Shelagh Rouse who finished in the top 25 at Provincials.