Conestoga's SAE mini-baja team placed 35th out over 150 entrants in this year’s event in Alabama. Conestoga was the only Canadian college entered and finished ahead of such American institutions as the University of Michigan, Purdue University, University of Texas, North Carolina State and Texas A&M. The University of Sherbrooke took home the top prize.

"With the generous support of the Denso Foundation and other sponsors, our team was able to design, build, and race their SAE Mini-Baja car in this year’s competition in Opelika, Alabama" said faculty advisor Roger Enns. "The construction process was a demanding one, as the Alabama competition took place the week prior to examination week here at the college. Fortunately the team was able to plan their course work well in advance, and at the same time put in the long hours necessary to complete the vehicle. We here at Conestoga are very pleased with the results, and proud of the continued improvements our team has shown over the last five years."

Denso Foundation provided a generous donation of $15,000 ($15,741 Cdn) to our team in response to our application for funds.

The following is a report by Jacob Botden, Cobra Team Captain.

For our team, this year’s SAE Mini-Baja vehicle project has spanned 8 months of design and build and already one competition. With the need for a new frame design this year, our vehicle actually started last school year in the hands of three Mechanical Engineering Technology Design and Analysis Students who created the initial design as their third year final project. This design provided the initial blueprint which was modified as the year went on to meet any current challenges. Although the finished vehicle may not always look exactly like what was initially created in CAD, the hundreds of hours of design work put in by these students provide the groundwork for a successful vehicle.

The MiniBaja team started this year with a well received awareness campaign throughout the school, gaining 7 new first year members and a much larger recognition inside the school. Around the same time, the team began planning and designing this year’s vehicle.

To continue to build on the previous year’s success, each year’s design process begins by setting goals based on last year’s deficiencies and any new ideas brought to the table. First we review the previously created design and plan what needs to be finished such as smaller elements like the braking system and body panels. This new plan also adapts the previous students’ design proposals and allows them to be manufactured within the limited resources and materials on hand. 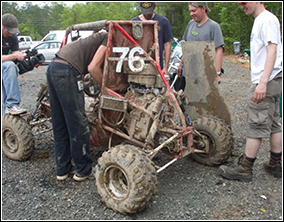 As soon as the material started arriving in early January, the main build stage began. Beginning in mid January and stretching to mid April, this is where the most significant portion of the team’s time was spent. Initially the team worked to build the main frame using tools such as tube benders, notching machines and a TIG welder purchased using Denso grant money. With the base of the vehicle finished, its sub systems can be added on such as drive train and suspension. The addition of these subsystems brings the vehicle close to looking like a finished vehicle and culminated most of the design work done on the vehicle. Adapting these systems to work on our vehicle is always a major challenge and took up most of our design and troubleshooting time once the build was in progress.

By the start of April these systems were all installed and the finer work of placing a driver inside the car and determining the placement of the many smaller components such as the steering wheel and pedals began. This time was also when we were able to make sure many different students were involved, no matter what their program or area of interest. They were involved in the many smaller projects which branched off, such as data acquisition systems, developing a cooling system for the transmission and other small projects.

With the build complete, the vehicle was tested and tuned in the school parking lot before being loaded up onto our newly purchased trailer and heading off to the Alabama SAE MiniBaja competition organized at the Auburn University NCAT test facility.

The Conestoga College team is always improving and this year is no different. Thanks to our sponsors' continued support and an ever growing knowledge base, the team is able to improve each year, sometimes in leaps and bounds. This year we were able to improve by 19 positions in our overall standings when compared to last year's initial competition. The generous support of our sponsors allows us to develop and grow a better backbone of the team, making it more knowledgeable, productive and competitive.