Conestoga's Athletes of the Year 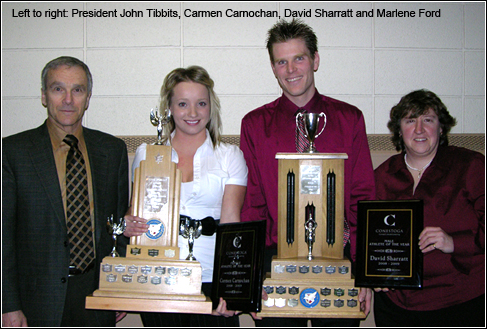 Conestoga is proud to announce soccer player Carmen Carnochan and cross country runner David Sharratt as the 2008-2009 athletes of the year.

Carnochan is a second-year student in the Law and Security Administration program and was captain of both the women’s indoor and outdoor soccer teams. She had a successful season outdoor scoring three goals and setting up four others. At the regional and provincial indoor championships the Seaforth native scored five goals helping Conestoga win an OCAA bronze medal, the first time Conestoga women’s indoor team has won a medal in over five years.

Carmen was also selected MVP or her indoor team for the second year in a row.

Besides soccer, she also played extramural hockey for Conestoga, leading the team in scoring in every tournament. She is a terrific athlete on the field and an excellent student and person off it. After graduation this spring, she plans to travel out west.

For the second straight year, Sharratt, a second-year student in the Mechanical Technician program has been named Conestoga’s top male athlete.

He repeated as the OCAA cross country champion this year, winning the individual gold medal with a time of 28:19, defeating a field of almost 100 Ontario college runners. He also helped Conestoga win the team title. He went on to represent Conestoga at the Canadian College Athletic Association championship at St. Lawrence College in Kingston. Out of 137 runners from across the nation, Dave finished sixth overall. He was also a member of the Ontario conference team which finished third. His other accomplishments this year include:

The hard-working Guelph native devoted much time this season to coaching the team at practices. We look forward to seeing him on the CCAA winner’s platform next season, when he returns to Conestoga.