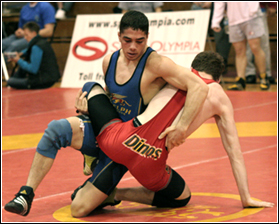 Most college students have trouble finding time for anything outside of cramming for exams during this time of the year. However Conestoga's Ryan Lue also finds time to train six times a week as he prepares for the World Wrestling Championships starting August 1st in Turkey.

A first year Police Foundations student, Ryan has been wrestling in his spare time and has won and competed in many competitions around the world. Having already won both the provincial and national championships this year, he’s looking to add the trifecta with a World Championship. Despite the fact he will be up against some of the powerhouse countries in the sport, Ryan sees a top eight finish as being quite attainable.

Ryan is confident that the time he puts into his training will pay off for him to reach this goal. Currently he trains twice a day, once in the morning with cardio, plyometrics or weights, and for another two hours in the afternoon practicing his wrestling techniques. Ryan likes to have many goals in front of him which include his ultimate goal of participating in the 2012 or 2016 Olympics. "I have been wrestling for seven years and what motivates me is the feeling of getting better each and every day at practice and knowing that hard work pays off," he says.

With his policing education at Conestoga, Ryan sees himself one day working as a parole officer or as a youth advocate. He enjoys his classes because his teachers have real world experience, which make the learning more exciting. While he has career goals with his education, he hopes to find a job where he can work a flexible schedule so he can continue wrestling. "I plan on wrestling until my body breaks down or until I’m just not having fun with the sport anymore."