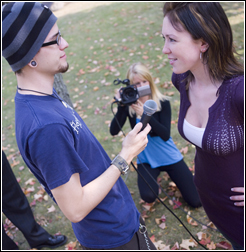 A dozen second-year students from Conestoga's Broadcast - Television diploma program are putting their skills and talents to work in a website show called Conestoga Connected (www.conestogaconnected.com).

Six of the students are specializing in writing/producing and the other six in videography/electronic news gathering. Working under the supervision of their respective faculty members, the team is producing a series of seven shows, with a new one posted online each week, as well as being broadcast via corridor information screens at the Doon, Guelph and Waterloo campuses.

Each Wednesday is production day. From approximately 9 a.m.-1 p.m., the videography students are on assignment, gathering the footage for the next week's program. Then they return to the studio at the Doon campus in Kitchener, joining forces with the writing/production staff from 2-4 p.m. to create the finished program.

Each week's show has a different feature built around a Conestoga academic area: nursing for the upcoming week, culinary arts for the following week and robotics engineering for the week after that, for example. In addition, each week’s broadcast has a number of different standard segments: campus news and information, off-campus student life, alumni profiles and intercollegiate/intramural sports.

Other Conestoga programs have pitched in on the project. Second-year Graphic Design students worked on devising the studio set and Visual Merchandising Arts students consulted with regards to elements of the presentation.

Innovation and use of new media are hallmarks of Conestoga’s expanded programming in the media and design area. Last fall saw the setup of a new service operated by students in the postgraduate Videography - Broadcast Journalism/Documentary program. It’s called "519 online" and features a number of local and campus news items shot and delivered entirely in high definition (HD). The program is the first online HD videocast in the area, and the show is available worldwide through a website known as blip.tv. Broadcasts can be seen at www.519onlinenews.com.