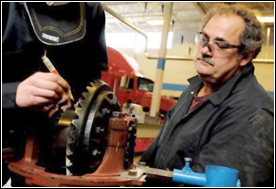 But Richard Dupe is looking toward the future with a lot of hope and a little trepidation.

Unemployed since the American Standard plant in Cambridge closed in September 2007, Dupe has spent the past year back at school, training for a career as a truck technician at Conestoga College's Guelph campus.

He was bringing home almost $600 a week when the plant shut down. His wife used to work as an office cleaner, but is now unemployed and not eligible for benefits. Their son, 20, hasn't been able to find work.

Dupe supports his family with $1,300 a month in living allowance he receives from employment insurance as a student, and some savings he managed to sock away. School fees, to the tune of about $3,000, are government funded.

"That was back when there were lots of jobs," he said.

So when he decided to retrain for a new career, it meant he first had to complete months of academic upgrading in math and English. Hitting the books and doing homework were exercises in frustration.

"When you first start something, you're not sure why you're not getting it," he said. His instructor, Richard Lajaunesse, said like many mature students, Dupe overcame his obstacles with great focus and an incredible work ethic. He's never missed a day of school, and he's the first one there every morning.

But soon he will be competing for jobs against people half his age.

"Some of these young guys, it seems like they can do 10 things at once," Lajaunesse said. Now halfway through his course at Conestoga, Dupe is looking forward to a co-op placement in the spring, hoping it will lead to an apprenticeship and, eventually, a career as a licensed mechanic.

But he's not counting on it.

"My immediate hope is to find a job, in this economy," he said. "If they're not shipping anything in trucks, then obviously they won't need mechanics. And if they did, they'd probably hire a laid-off mechanic before an apprentice."

Ann-Marie Gilroy, a counsellor at the college's career centre, said the government only offers job training funds for careers they believe there is a market for. Social services, health, trades and the green technology sector are expected to expand over the next few years.

"I'm confident that with the support that they get, they can find jobs at the end of it," she said.

The career centre, which Gilroy said has been "insanely busy," offers services such as resumé building and labour market information free to all com- munity members.

There's a waiting list at some of the region's career and assessment centres. In the meantime, it's important to get out and explore your options, she said.

Dupe said going back to school has prevented him from sliding into the depression that could be caused by a drastic mid-life change.

"I was stressed from losing a job. . . . I worked with those people for 20 years. They were my friends.

"If I was to say it's a breeze, I'd be lying to you. If I don't find a job in the next little while, hardship is coming. I'm running through my savings."

But for now, he's turning layoffs into lemonade. "This is an opportunity for me to do something I want to do -- not something I have to do."

For more about what career training might be available for you, visit
www.conestogac.on.ca/careercentre/fundedprograms.jsp
cprongparkhill@guelphmercury.com
Originally posted in the Guelph Mercury on February 03, 2009
Charlotte Prong Parkhill
Photographer, Ryan Pfeiffer