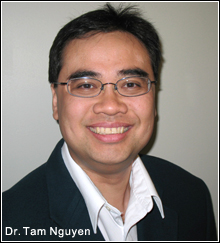 Dr. Tam Nguyen, who is a professor at Conestoga, is co-winner of the 2008 Charles H. Jennings Award of the American Welding Society (AWS). The honour is as the result of a paper published in the AWS Journal which is judged to be the source of a most valuable contribution to welding literature and is the result of work conducted primarily by students and faculty at a college or university.

Nguyen was lead author of the article titled The Discontinuous Weld Bead Defect in High Speed Gas Metal Arc Welds, which originally appeared in the November 2007 issue of the AWS Journal. He collaborated with two University of Waterloo faculty members on the piece Dr. David Weckman and Dr. David Johnson of Waterloo's Department of Mechanical and Mechatronics Engineering.

Gas metal arc welding is the most common automatic welding process used in industry. It is also easily adaptable to robotic automation environments. Dr. Nguyen's paper for the first time identified the root causes of a problem that occurs in high-speed production welding and one that presents a serious impediment to advances in gas metal arc welding productivity improvement in industry worldwide.

The Charles H. Jennings Award is sponsored by friends and family in memory of Jennings, who was President of the American Welding Society in 1951-52.

The AWS serves more than 50,000 members worldwide, including engineers, scientists, educators, researchers, and welding practitioners and executives. Its goal is to advance the science, technology and application of welding and allied joining and cutting processes, including brazing, soldering and thermal spraying. The organization has its headquarters in Miami.