As part of the Skilled Trades Week in Canada, the Team Canada Members from Ontario joined the Minister of training Colleges and Universities, John Milloy for the Skills at the Park event organized by Skills/Compétences Canada Ontario.

Every two years, Canada competes at the WorldSkills Competition, against the best in the world!

From the 1st to the 7th of September 2009, Calgary, Alberta will host more than 900 competitors from 50 countries to participate in WorldSkills 2009. This competition symbolizes the height of excellence in trades and technologies.

Of the 7 competitors from Ontario, two are from Conestoga College. 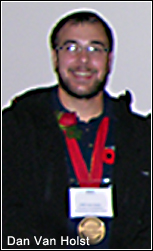 Dan VanHolst of Waterloo is a student in the Automotive Service Technician apprenticeship program at Conestoga’s Guelph campus and the Canadian competitor in the Auto Service Technology competition.

Both Dan and Jud are undergoing an intensive 15 month training program administered through Skills/Compétences Canada, and delivered by volunteer trainers.