Kitchener mechanic is a trailblazer 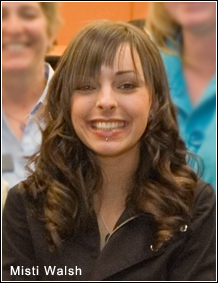 The 22-year-old Kitchener woman is a trailblazer in local auto mechanics. She is the first student to take the all-girls automotive course at Kitchener's Eastwood Collegiate and go on to become a fully-licensed mechanic.

The course has been running on and off for about 12 years.

Walsh's framed auto-service technician certificate, which she received in August, hangs at Old Fashioned Services on Highland Road near Petersburg.

It's been a long road for Walsh, who was once a struggling student with a part-time job in the jewelry department at The Bay.

In high school, she needed some credits to graduate, so she enrolled in the automotive class. She knew nothing about cars, but soon realized she had a knack for auto mechanics.

Her teacher, Steve Spence, encouraged her and helped her get a co-op placement at Old Fashioned.

Walsh enjoyed the challenge of the job -- and the satisfaction of diagnosing a problem. Not too long ago, she swapped the engine in a Ford F250. She was a little worried the truck wouldn't start up after she reassembled the parts.

"I just cranked it up and it started perfect. And I had this stupid grin on my face for like a week."

"Sometimes a lot of people are hesitant because I'm a girl, and I look young," said Walsh, who's about five feet four inches tall.

"They'll watch over my shoulder and be under my feet."

The first few months of working in the shop, Walsh had a steep learning curve, she said.

"It's really, really challenging at the beginning," she said.

One time, she slid under a big truck and her hair got caught.

"I just lay under the truck and tried not to cry," she said.

Other times, it's been hard to work on vehicles because of her slight frame. But this is nothing a longer pry-bar can't fix, said her boss, Dave Becker. And Walsh has become much stronger since she started.

"We have to get a big wrench to take out some of the plugs she's done," said co-worker Jesus Grande.

More women are going into skilled trades, though the numbers are still low, said Tanja Gancevich, a Conestoga College co-ordinator of women in skilled trades.

"They need to be OK with getting their hands dirty," Gancevich said. And most are.

"The women like the sense of accomplishment at the end of the day."

According to Statistics Canada, 85 women were auto-service technicians in the Kitchener area in 2006. That's about three per cent of all auto mechanics.

In March, the Ontario government injected $1.5 million in skilled trades programs for women.

A carpentry program for women began at Conestoga last month. Spence still teaches the all-girls class at Eastwood. Yesterday, some students were fixing a rear wiper motor in a teacher's van. Others were learning autobody work and repairing brakes.

"We want to prove the guys wrong," said Josie Kirschbaum, 17.

"Girls can do it just as well."

They start with the basics: changing a flat tire or changing oil.

"They feel so comfortable in here," Spence said.

And eventually, if they show they've got what it takes, Spence will encourage girls to pursue it as a career -- like Walsh.

Now Walsh talks to groups of Grade 7 and 8 girls for Skills Canada, telling them fixing cars isn't just for boys. She tells them it's tough, but the rewards make it worthwhile.

But for now, she's right where she wants to be.

"There's nothing else I'd rather be doing," she said. "Everyday gets better and better because I just keep learning more and more."