This is the sixth year that the Alumni Association of Conestoga will be sponsoring Welcome Home awards. These awards are available to first year students enrolled in the first year of a certificate, diploma or degree program who have a parent or guardian who is an alumnus of Conestoga.

The awards have really grown over the past five years with 39 being awarded in 2007. Each year, the Association celebrates these students along with their parents at their Annual General Meeting held in November.

Last year, Rob Krause, who graduated in Computer Programming in 1986, attended the AGM with his son Rick who was receiving this award as a first - year Architecture student. Rick sites his dad as being a big influence on his decision to attend Conestoga. “I knew it was a good school and it was one of my top choices, but having my dad as a past grad made the decision a lot easier,” said Rick.

Rob was very impressed with the changes on campus. “I walked into the school and saw a Tim Horton’s and a Coyote Jack’s which was never here when I was at Conestoga,” he said. “The school is definitely a lot bigger than it was.”

If you are a graduate of Conestoga and have a son or daughter entering their first year of studies, you can access an application form for this award. 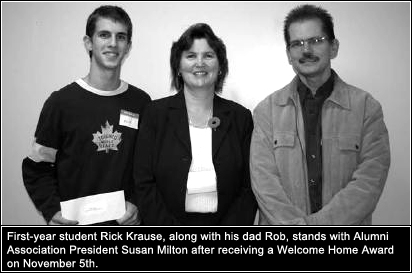