Homework really does pay off, as some first-year graphic design students found out. The students won approximately $1,800 in total this year after participating in a national contest open to anyone in Canada under the age of 18.

This is the second year Conestoga College students have won awards in the Karat Aquarell art contest and Mars Lumograph sketching contest. 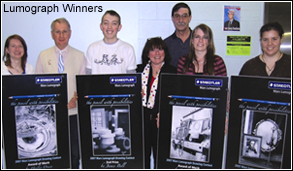 “His class is awesome!”

Sowa said entering the contest is part of a class assignment. Students spent a week working on the assignment but also had two or three other projects on the go.

“Students work from their own photography. They have to take their own picture and work from it, using the same colours to create their masterpiece.”

This is the third year the contest was held for watercolour and the second year for pencil drawings.

Judging was done in Toronto by Peter Crighton, a renowned Canadian contemporary artist.

About 100 non-professional artists from across the country entered the contest.

The first-place winner’s artwork is reproduced as a colour ad in Applied Arts magazine and Grafika magazine based out of Quebec. The second-place winner gets to have his or her artwork on a limited edition Staedtler sketchpad or watercolour pad and distributed as a bonus on 2,000 sets of Aquarell watercolour pencils and 2,000 sets of Lumograph sketching pencils this year.

“In the next few weeks all of the winning artwork will be posted on the website,” said Manning.

Sowa said the faculty is very excited when the students win.

“It’s great to see this happen again,” said Sowa. “It shows the quality of first-year students.”