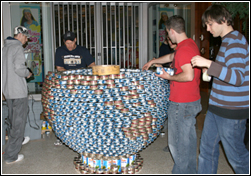 Students and Faculty from the Architecture Construction Engineering Technology Program entered a team in the first Canstruction® Building competition hosted by the Food Bank of Waterloo Region. Canstruction® is a building competition that is held in cities across North America. This event was developed to bring together, in the spirit of friendly competition, engineers, architects, designers, construction professionals and students who will work in teams to design and build structures using canned and packaged food. These impressive structures are built for public display and judging by a professional panel and the general public. Most importantly however, all of the food from each structure is donated back to the Food Bank of Waterloo Region and will be used to feed individuals in our community.

OH WHAT A NIGHT it was on Friday during setup!!! We started our build at 10pm and we were the second last team to be finished at 5:15am. Our 7 hour build proved to be full of fun and excitement. Though our first set back came 5 minutes into the build when we realized our 'gold' cans were a different height than our 'blue' cans, yet, we managed to persevere and make the build a reality.

In keeping with our programs emphasis on sustainable design and green building practices, our Canstruction® theme was ’Building with our World in Mind’. Our student team structure design included a large scale model of the Earth, a section of scaffolding and a ladder. Student dedication to this event was great with about 25 showing up for the long build night. Although only five people could work on the build at one time (we did push it to seven or ten at any one time!) we seemed to keep others busy. Some were unpacking cans, while others put together our scaffolding, and ladder (we won't mention that the ladder broke and nearly took out our complete globe!!! at 4:30 in the morning). I believe that everyone had a great time. 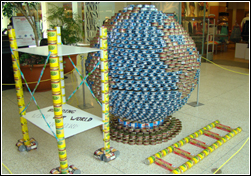 On Saturday night we attended the Gala Awards presentation. There were 5 awards available for the 10 teams that were there. Not bad odds, 50/50 that we could get something. At the end of it all, our students hard work paid off, we won the award for Structural Integrity. Our model was selected because at first glance the judges could not see how the layers of cans were supported. Even upon closer examination the judges could only see the tape that was placed on top of the cans and not the internal support structure. We did an amazing job considering the caliber of all the canned structures.

Canstruction® took place from March 28 through April 4, 2008 at Conestoga Mall
and is part of the Food Bank’s annual Spring Food Drive. This year’s goal is to raise 150,000 lbs of food – food that is then used for emergency food hampers, community kitchens, shelters, support programs and to feed over 25,000 of our neighbours that rely on the Food Bank each year.