Conestoga College will receive $290,000 in fiscal year 2008-2009 to provide continued opportunities for women to pursue education related to entering careers in the skilled trades. The funding comes via the Women in Skilled Trades program (WIST), administered by the Ontario Women’s Directorate. The funding will be used to deliver a general carpentry program starting in September at the campus in Waterloo. 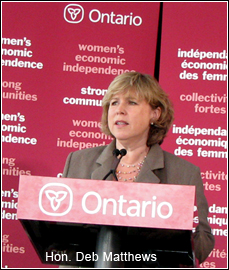 The new funding was announced at Toronto’s Humber College on March 6 by the Hon. Deb Matthews, Ontario’s Minister Responsible for Women’s Issues. The Conestoga allocation is part of a total of $1.5 million that will go towards WIST projects and initiatives in seven cities throughout the province.

“When we support women, we build stronger communities and a stronger Ontario. Let’s celebrate and recognize the talented and dedicated women in our lives,” she said at the announcement event.

Over the last several years, Conestoga has had an outstanding record of accomplishment in WIST programming. The WIST general carpentry initiative began at the Guelph campus, but the current and future WIST carpentry activities are housed in the newer, larger carpentry facility which opened in 2006, when carpentry training relocated to the Waterloo site, thereby enabling Conestoga to undertake major new initiatives in motive power trades at Guelph.

The WIST carpentry program will have enrolment space for 25 students, and will consist of 28 weeks of daytime instruction at the campus followed by a 10-week period of work placement. Among the many skills areas included in the program are renovations, rigging, finish and trim, computer-aided design/drafting, welding, electrical wiring, communications and employment strategies.

Conestoga will conduct several free information sessions for women interested in this program. Attendance at a session is mandatory, as is a subsequent assessment session and program suitability interview.

The information sessions will be at the Waterloo campus beginning at 5 p.m. on the following dates: March 27, April 3 and 17, and May 6 and 15. The assessment sessions will take place in late May.