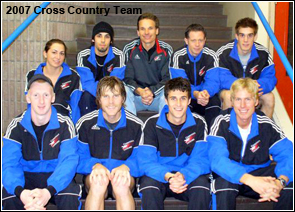 Conestoga's Men's Cross Country team finished fifth in their first ever trip to the National Championships in Grand Prairie, Alberta. The conditions were very difficult because the athletes were forced to run in blowing snow at altitude over very hilly terrain which gave the athletes from Alberta a distinct advantage.

All of Conestoga’s athletes performed extremely well. Every man on the team gave his 100% effort on that day and that is all you can ask as a coach from your players. These athletes are fiercely loyal to each other and they proudly represented Conestoga College on a National stage.

The goal of the Men’s team is to win a medal at the 2008 National Championships in Kingston, Ontario. As their coach, I believe that their hard work, discipline and willingness to learn from each other will make this come to fruition. As their coach, I am extremely proud of all of the athletes because they listened to me, worked hard and they cared about one another. These are values that are not always commonplace in today’s society. I hope that we get new runners out next year so that we can take the female cross country team to the National Championships with the Men’s team. Conestoga College is proud to have been represented this year by such fine young men and women on the cross country team.