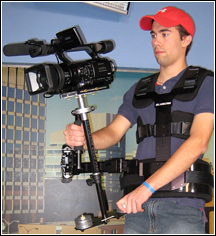 They’re completing film-look projects with exciting new technology that creates smooth, fluid video, even when the camera is in motion.

They’re using recently acquired Glidecams, cousins of the much larger and heavier Steadicam, used in almost all Hollywood movies and made-for-TV programs. The Glidecam relies on principles of physics and friction to separate camera movement from the movements of the camera operator.

The Broadcast Television Program now has two Glidecams in use. One of the units is worn with a full-body brace, which is the base for a free-floating extension arm holding one of the program’s Sony HD cameras. A camera person can run with the camera and produce steady, smooth shots. It’s a thrilling experience for the TV students who focus on film aesthetics and film-look in the final semester of their program.