Like other repair shops, Royal Stainless Steel Tank and Truck has a tough time attracting mechanics. 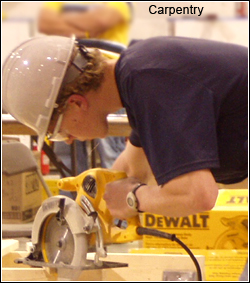 "It does take a while to get qualified people," president Steve Crawford said yesterday, welcoming Conestoga College's latest round of upcoming free pre-apprenticeship programs.

There's a shortage of apprentices in the region, Crawford said.

"I think any program would be beneficial . . . anything to get people introduced into the trades."

Youths are reluctant to consider apprenticeships where they learn in classrooms while getting on-the-job training because they start out earning modest wages while they develop their skills.

That's particularly so, Crawford added, when they can earn good wages at manufacturing companies like Toyota Canada without specific skills.

"That's pretty enticing," Crawford said, adding they can't depend on Canadian manufacturing as an employment source in the future.

"The manufacturing jobs are dwindling," he warned.

Kitchener-headquartered Conestoga College, with a campus on Speedvale Avenue in Guelph, is hosting public information sessions on two pre-apprenticeship programs: truck and coach technician in Guelph and general carpentry at its Waterloo location. 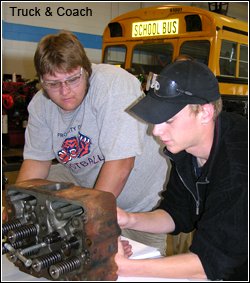 The college's Guelph campus opened a truck and coach bus technician centre for apprenticeship training in the fall of last year.

It also launched a pre-apprenticeship program in that field, from which the first group of students graduated this past summer.

All of the two dozen students found work.

"I think we were pretty successful," Brenda Gilmore quipped yesterday, adding students were quite thrilled to graduate. "Many of them said it was an opportunity of a lifetime for them."

The college's School of Trades & Apprenticeship employer liaison said all the students found job placements to begin their new careers.

Employers are reluctant to hire youths or consider apprentices they don't know have an aptitude or desire to work in the trades. Those enrolled in pre-apprenticeship programs learn basic skills and demonstrate such affinity. The next round of programs, paid for by Queen's Park, begin shortly.

The carpentry program lasts 27 weeks and is held at the Waterloo campus beginning Jan. 7. The truck and coach technician program, which is 23 weeks long, starts Feb. 4 at the Guelph campus.

Both programs end with eight-week work placements to gain practical, on-the-job training. There's room for 24 students in each program.

"We haven't selected any candidates yet," Gilmore said.

After the tours, potential candidates will be assessed and potential candidates called in for interviews. The preapprenticeship programs are open to any Ontario residents entitled to work in the province who are 16 years of age or older. It's preferred they have Grade 12 or equivalent, though that's not a strict requirement and people with education deficiencies can always upgrade through college programs, Gilmore said.

Pre-apprenticeship is another avenue into a rewarding career, she said.

"It encourages people to get the skills to get into trades."

Those in the truck and coach technician field can expect to work on larger buses and trucks, though the career can lead them into related fields, like repairing heavy equipment or truck and trailer servicing, Gilmore said.

Having the ability to repair and maintain trucks, she said, is a significant employment advantage in a region with quite a few hauling firms. The trucking industry is a vibrant one here, Gilmore said.

Those who want a sneak peek at both programs can do so Nov. 27 at 5 p.m. at the Waterloo campus and Dec. 4 at 5 p.m. at the school's Guelph counterpart. There's also a public information session on Dec. 10 at 5 p.m. at the Guelph campus for the local program, which focuses on the repair and maintenance of trucks and buses.

Those who want a general tour of the Guelph campus, and not just the pre-apprenticeship program, can do so at a public information session.

More information on the trades and apprenticeships is available through the college's website at www.conestogac.on.ca/trades.