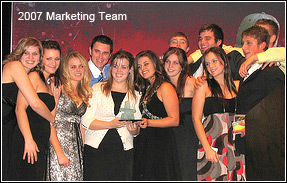 A team of 15 students from the Business Administration - Marketing program of Conestoga College has just returned from Fanshawe College in London having earned the team bronze medal in the annual Ontario Colleges Marketing Competition (OCMC), a test of multiple skills in marketing involving teams from 15 Ontario colleges. OCMC 2007 took place on November 15-16.

At the London competition, Conestoga trailed only St. Lawrence (gold) and Niagara and Sheridan (tied for silver).

The 15 Conestoga team members include eleven third-year students, and two each from the first and second years of the program.

Fernando Aylagas and Milton Moffett of Kitchener are the second-year students; Amy Jackson of New Dundee and Nathan Rayner of Dundas are the first-year students.

In addition to the team honours, several Conestoga entrants won individual medals. Gold medals went to the twosome of Gojmerac and Leffler in the international marketing case study, to the team of Kallay and Woods in the retail case study, and to Moffett in the rapid-response event known as the Quiz Bowl. In the marketing research case study, the Gojmerac-Leffler pairing also won a bronze medal.